In magic, some tricks and props have become largely outdated, grossly overused, or commonly done in poor taste. What’s more: some are no longer deceptive. The fundamental mystery is now well-known to non-magicians. (With sites like YouTube, this will grow significantly, but that’s a discussion for another day.) 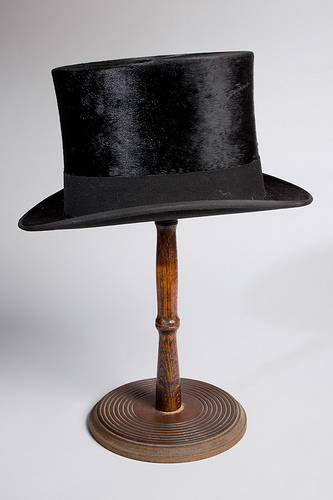 I made this list partially while attending a convention a few weeks ago. It is by no means all-inclusive. While I may poke fun occasionally, it is not intended to be destructively critical; that is, I have no desire to belittle anyone personally. Rather, I am simply suggesting there might be better magic to be considered in place of the material mentioned, and I would be thrilled to see modern performance and those seeking to present modern (or even post-modern) magic evolve. And yes, in the right hands, there will be exceptions to nearly every item.

The problem with saying there are exceptions, though, is that everyone believes they must be one of them, too.

So, now that I’ve written some paragraphs for people to skim over, let’s begin:

When Simon Drake did the guillotine for Iron Maiden’s Raising Hell concert, it fit perfectly in that context. When Neil Patrick Harris performed the same piece it on Ellen, it didn’t fit as well within the context of her viewing audience (though he did the trick very well—-perhaps too well.) But, when the average magician does the trick, it falls flat. Why? Occasionally, it’s because the magician is performing this for children, but more often, it is because the performer invites the spectator to be the one in the apparatus. Usually, this is inconsiderate, embarrassing, the kind of thing that adds to peoples’ fear of being selected by a magician, which is the kind of thing that adds to peoples’ general dislike of magic acts.

This is not a question of whether or not smokers have the right to smoke. It’s simply acknowledging that, in today’s society, tobacco magic isn’t seen with favor and represents what is becoming passé. The cigarettes and pipes become a mental obstacle for the audience to overcome before they can appreciate the magic, so why even put yourself in that position?

As an example, I love seeing bubbles filled with smoke, but I can also see how a parent with a child in the audience might not like the juxtaposition of a fun kids activity like smoking being paired with the dangers of bubbles. Wait a minute. Strike that. Reverse it.

Firstly, the floating ball is a great effect—a large, heavy ball floats without any visible means of support. Well, in theory. After seeing it done a handful of times, audience members with half a brain begin to call it “The Ball On Stick Trick.”

Enter Tommy Wonder, who put the final nail in the coffin with his groundbreaking work using elegant mechanics and proper motivation to restore the essence of the effect. Nevertheless, the so-called “classic” version still roams the Earth—which, given the title, shouldn’t be too surprising.

How many formal events have you been to recently where young gentlemen carried canes? Once upon a time, your answer would be greater than zero. Twice upon the same time, canes were rightly considered modern magic; now they are anachronistic. That said, I have seen David Copperfield and Ray Anderson perform beautiful dancing cane routines. Exceptions.

Not an exception, however, is the semi-professional teenage magician who waltzes out waving a silk handkerchief (as is the custom), transforms this scarf into a slightly curved cane with a muffled snap, twirls the cane as per the instructions, discards the cane immediately, and then proceeds to do something with laser lights.

Yes, that looks like an entire genre up there. Unlike others on this list, my argument is not that silk magic is overused and outdated, though one could fashion compelling evidence for this. Instead, I contend that the use of more than two silk handkerchiefs in a trick might be hazardous to the perception of the performer and his magic.

Of all the objects that have the potential to make a sophisticated member of the audience (whether correctly or incorrectly) see the performer as second-rate and his magic as being exclusively for children, a bundle of silk handkerchiefs in the saturated colors kids enjoy might do the trick. (Ironically, the presence of large amounts of silk was once considered luxurious, and often enhanced a performance rather than cheapened it.)

The use of one or two silk scarves, however, carries much less risk of the above. Think Billy McComb, Vito Lupo, and others.

Here’s an exception with a twist: Slydini loved the production of silk scarves and the silk fountain. He thought it looked beautiful, and in his hands, some thought it did. That was also nearly 40 years ago. Today, it may be wise to leave the silk fountain to the legacies of those like Slydini—unless your name is Yumi Nakajima.*

Let me be clear—I’m referring to a specific method and presentation, the essence of which can be seen easily on YouTube. It was an excellent trick when it was introduced, but this handling has become too common and may not be as mysterious to non-magicians as we’d like to think.

A gentle man walks to center stage and tells us that he intends to tear his own newspaper to shreds. The audience, understandably, gasps. He then proceeds to do so while telling a story that is most likely untrue. Having torn the paper into nice rectangular pieces, he then gets a bit angry with them. This works, for a whole newspaper instantly (more-or-less) appears between his hands—fully restored and only a bit heavier for the whole ordeal. As he carefully thumbs through the three pages, it becomes clear to us that he lives in a town with very little news.

Now compare the above to Robert Harbin’s version. His movements are motivated by solving a problem, the restoration looks perfect, and there’s no unnecessary overselling before or after. Furthermore, people in Harbin’s day would actually be reading the newspaper on the subway, instead of texting and watching viral videos.

Finally, the overuse of the effect alone should be enough to give pause to its inclusion. If that’s not enough, remember that the newspaper is an object that may very well be outdated soon.

I feel the most elegant and mysterious dove magic is done with a minimum of props.

Balloon to dove is a strange item. The performer inflates a balloon, clamps it to a very suspicious looking tray (one much thicker than what is needed to hold the enormous weight of a balloon), and Voila!—traumatized bird! Perhaps someone wanted to charge an extra fifty bucks for having a show with animals, and this prop just screamed to be bought at the local auction. Nevertheless, it probably isn’t very deceptive to adults. As for kids, it’s the bird that is getting the strong reaction, not the trick. If you doubt this, just skip the trick and pull the bird out of a paper sack. You’ll get the same enthusiastic reaction.

Regarding the cage vanish, I just don’t believe it is necessary to conclude every dove act with the vanish a half dozen birds in a cage—a cage unlike any the average person has ever seen. Plus, to return to a common theme, everyone does this. When everyone is doing the same thing in their performance, rather than be just another in the flock, wouldn’t it be more creative to do something different? Many magicians only want to do the tricks everyone else is doing—that’s fine when you aren’t trying to market yourself as a professional. When you are, however, you’ll want to be more ivory-billed woodpecker than dove.

While CD’s are still familiar, they are quickly becoming outdated. Now, people have iPods and Zunes. I’m just kidding; no one has a Zune. Anyhow, the reason why these props worked well when they did was that they were newer technology to the culture of their time. Now, using records or CD’s in your act would be like using a CRT monitor, a VCR, or a line from a Robert Orben book.

Just recently, I saw a performer coerce his volunteer to get half undressed on stage. I find this disrespectful to everyone present. Of all the magic you can do, why do crude magic?

This is so rude and demeaning to a volunteer that it shouldn’t need to be mentioned, but I still see something with a bra or boxer shorts show up occasionally. Even if you were to do the effect to yourself, a la Professor Cheer, it still gets only cheap laughs. I suppose as long as it stays in the catalog, people will still buy it and perform it.

Don’t get me wrong, though. You should still wear underwear whilst performing.

If you are playing the part of Mandrake, or you are this person, you can ignore this one. Otherwise, remember that in the 21st century, people do not generally wear top hats or capes, for they have fallen out of fashion—like legwarmers, Crystal Pepsi, and the color beige.

The classics are not immune; I realize and accept that some will disagree.

I’ve seen scores of linking ring routines; so has everyone else. A handful were terrific. Nevertheless, while the beauty of the effect may still remain in the hands of a skilled performer, the fundamental secret is out: one has a hole. I know that; you know that, and your neighbor knows that. Because of this, not only does the performer face the snap dismissal of “I’ve seen this one before,” she also has to increase the volume of the music to drown out the murmur of everyone, in unison, whispering to their neighbor, “I know how this one’s done.”

Unless I were confident in overcoming these challenges, I would think thrice.

“Where is the mutilated parasol?” Annemann asks. “The Passe-Passe bottles?” another inquires. Well, for the sake of being practical, ubiquity played heavily into the criteria for inclusion. While these are two effects that may be better set aside, I just don’t see them often enough to put them on the list. Your experience may differ.

Clearly, these are not hard-and-fast axioms to be applied 100 percent of the time. They are simply intended to be a perspective that may serve to guide your consideration of how certain material might be perceived by today’s audience.

Finally, I cannot stress enough what I mentioned at the outset; that is, much of what I’ve written is aimed at a specific or common presentation using the items mentioned, and not intended to eradicate every use of the props listed (with one or two exceptions). And remember, I’m writing this for those who wish to present themselves as modern magicians—not for those who have other characters.

*Thanks to Austin magician Brad Henderson for some of these video examples.

Once upon a time, I was asked to perform on-the-spot at a bar in downtown Austin. I was completely unprepared, so I found a couple of rubber bands and passed them through each other as if by magic. I got a pretty decent response from the... Continue →